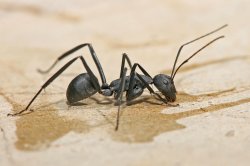 Carpenter ants have one node on their petiole and come in many varieties with different sizes and colors (tan, black and red). These ants feed on insects and insect secretions but also like sweets and many other foods. Carpenter ants hollow out dead, moist wood in trees, firewood, fence posts, and even structural framing and wood members in structures to build their nests but they do not eat the wood. Inside structures they build colonies in wall voids, foam insulation, eves, crawl spaces, behind siding, in attic insulation and many other places. Carpenter ant nests have even been found in areas where no dampness is found. Carpenter ants forage at night during the summer; however they often invade structures spring and fall looking for food sources. Many times homeowners will find these ants swarming inside, especially around lights and windows. The first step in controlling Carpenter ants is to locate the colony. Inspection is best done at night when these ants foraging activity is increased. The most common areas to inspect are areas of the structure associated with high levels of moisture. Common areas are window and door frame areas, roof line moisture spots, deck frame plates, Basement sill plates, around plumbing walls or areas where you are aware of moisture problems. Also check trees and tree stumps close to structures and landscape ties. Check tree branches and limbs touching the structure. Follow foraging Carpenter ants in order to find their nesting sites.

All ants are members of the scientific order of insects called “Hymenoptera” which means membranous wing. Wasps, hornets and bees are also members of this order. There are many thousands of types of ants, yet they share many common characteristics. All ants are members of the scientific family of insects called Formicidae. Members of this family live in colonies with one to many queens, immatures, many sterile workers and occasionally males. The workers are wingless and characterized by elbowed antennae and either one or two raised bumps on the petiole of the abdomen. Only ants have these raised bumps on the petiole.

Ant colonies can be found outdoors, indoors, in walls, under wood, slabs and many other places. The worker ants maintain their developed structures which are known as “nests”. Nests protect the ants against their enemies, against weather, and are the most often found close to water and food sources. Ant swarms are confused many times with termites. Some Ants, such as the Carpenter ants, nest in wood by digging out a cavity in the wood. This cavity is known as a nest gallery. Ants can not eat and digest wood as termites can because they can not digest cellulous. Some ant species will eat a wide variety of foods, while other ants limit what they eat. Food preferences can change depending on the specific needs of the colony. Worker ants will forage for food and bring back proteins for the queen or queens during periods of high egg production, then switch back to sugars or greases while maintaining the colony. Once a food source is found, they will lay down a hormone called a pheromone to serve as a chemical trail so that other ants can find their way to and from the food source to the nest.

Ants play a major role in the formation of topsoil. Ants affect the soil through soil movement, soil aeration and nutrient cycling. In the construction of their nests, soil from deeper levels is brought to the surface, thus bringing the nutrients back to the soil surface. The nest, with its many tunnels and chambers, allows good aeration of the soil. The tunnels also aid in water movement into the soil. Ants also collect large quantities of food during their foraging activity. This underground storage of large quantities of organic materials may help fertilize the soil, in addition to feeding future generations of ants.

Pavement ants are 1/8” to 3/16th”long with a brown to black body and lighter colored legs. There are two nodes on the pedicel. The narrow, parallel furrows on the head and thorax easily identify the pavement ant. These ants nest in soil beneath stones, pavement or slabs. Occasionally they will build their nests in walls, under floors or in insulation. Pavement ant colonies produce swarms from out-of-door nests in the spring, but continually when within the structure. They prefer meat or grease, but also feed on dead insects, seeds and sweet products.

Little black ants are jet black in color and the workers are 1/16th inch in length. The petiole has two nodes. The antennas end in a three-segmented club. Nests may be located in the soil, rotten wood, woodwork or masonry of houses and buildings. The colony produces swarms from late spring to early fall. These ants feed on dead insects, honeydew sweets, meats, bread, grease, oils, vegetables and fruits.

The worker ants of the Odorous house ant are brown to black and 1/8” long. The petiole has only one segment with a small node hidden by the abdomen. The best identifying mark for this ant is the “rancid better” smell of crushed ants. These ants often nest outdoors under stones and logs. They also nest indoors in walls and floor voids, especially around heat sources. The Odorous house ants usually mate in May through mid July and seldom swarm. The females mate in the colony, and produce new colonies by budding off the original colony. Each nest will have several egg-laying females. These ants prefer sweets but will feed on honeydew and almost any household food if found. They may invade houses and buildings during rainy weather in search of food.

Large yellow ants range in size from ¼ inch to 3/16th inch in length. These ants are pale yellow to yellow-red and have a single node on their petiole. Large yellow ants are referred to many times as “citronella ants” because they have a lemony smell when crushed. Nests may be in the soil under cover, in rotting wood or foundation walls. Nests are usually underground, although, and the ants only come to the surface at swarming time. Large yellow ants swarm in the early spring. When a colony is under a heated slab or floor, winter swarms may occur. These ants may push soil out of basement cracks giving the homeowner a thought that they may have termites. Yellow ants prefer sweets and tend aphids for the honeydew.

Pharaoh ants are very small. Workers are 1/16th inch long and yellow to light brown to red. The petiole has two nodes. Nesting sites are usually in very hard to reach areas. Common nesting sites include, but are not limited to, warm wall voids, sub floor areas, wall voids, attics, cracks, crevices, and behind baseboards. These ants do not swarm. Female Pharaoh Ants mate in the nest, and new colonies are formed by budding. This means part of the original colony moves with a young queen to a new nesting site. Mating may occur at any time during the year. Pharaoh ants seem to prefer meats and grease but will eat almost anything, including insects, sugar syrups, fruit juices, etc.

The most effective method for controlling ants is by baiting. Foraging ants will take the baits back to the colony where it will eventually kill the queen(s). Attempt to locate the nesting site before disturbing the ant’s activity. Place the bait down along or close to the trail way and observe the ants as they trail back to the nesting site. A trial and error approach may be needed in order to find baits which the ants prefer. If the actual nest can be located insecticides may be applied directly into the nest to eliminate the nest. Contact your Gotcha! Pest Control Specialist for more information on which control methods and baits may be best for your home or establishment.