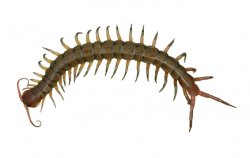 Warm, wet weather always encourages the activity of several moisture loving creatures, including millipedes, or thousand feet worms, and their relatives, the centipede. At times millipedes become so abundant that they cover surface areas as they enter homes and other buildings. Millipedes are cylindrical, segmented, worm like creatures, with two pairs of legs on each body segment, except for the last three, which have only one pair. Over 1000 species occur in the United States. Their activity is encouraged by wet conditions and the overuse of mulches around structures and homes.

Centipedes are related to millipedes and are also worm-like in form, but they differ in having flattened bodies and only one pair of legs on each body segment. They also possess a pair of poison claws or legs just behind the head which are used to paralyze their prey which are usually other small insects or animals. Most centipedes are beneficial, yet the large species found in tropic areas can reach a length of up to 18 inches and inflict a painful bite.

Millipede eggs are deposited in masses in the soil. Young millipedes have fewer segments then the adults, but they add segments at each molt of the outer shell or exoskeleton. Molting occurs 7-10 times before maturity. Young millipedes mature the second year after hatching. Some millipede species live for several years. Similarly, centipedes molt several times, adding legs and body segments with each molt.

Millipedes feed on organic matter, including decayed plant material such as leaves and wood, and occasionally, living plant roots and rootlets, and developing fruit such as melons with a preference for cantaloupes and cucumbers. Affected plants may wilt and die and melons may develop rots caused by bacteria or fungi which are introduced by millipede feeding. When millipedes are abundant in mulches and liter in landscape plantings around homes and structures they often enter through cracks and crevices. Once inside, they usually die unless the areas they enter are very moist. Entry into homes and structures is most common after heavy spring rains saturate the soil and drive millipedes to higher ground. Millipedes also enter homes and structures in the fall, when they seek hibernation sites. Centipedes can be found outdoors, often under stones, boards, wood piles and other misc. ground coverings. They also live under leaf litter and other organic matter. Occasionally these outdoor species invade homes and structures where they are a nuisance, yet are not destructive.

There are several things that can be done to control and prevent millipede problems. Reducing mulch thickness around the home or structure, reduce watering schedules, and pulling mulch away from plants to allow them to dry all will help control millipede feeding and reproduction. To prevent millipedes from entering homes and structures be sure that screens are tight, that moisture holding debris in window wells is eliminated, and that mulches around ornamental plantings are at least 6 to 8 inches away from the foundation.

If centipedes become a continued problem inside a structure then their may be another insect problem present since insects are a primary food source for centipedes. If centipedes are common indoors, look for insects such as cockroaches, flies, boxelder bugs, elm leaf beetles and other general insects. Controlling these insects may be the key to eliminating the centipede problem. Removing the mulch adjacent to the foundation or occasionally allowing it to dry out should also help reduce centipede activity.