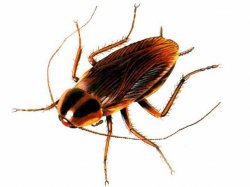 Cockroaches are one of the most successful animals known in the evolution of the planet. There are more then 3,500 cockroach species existing in the world. Cockroaches are classified in the insect order Blattaria. They are separated into five families based on their shared characteristics, namely, Blattidae, Blattellidae, Cryptocercidae, Polyphagidae and Blaberidae. In general, cockroaches are tropical and live outdoors. However, 25 species are found in close association with humans. Cockroaches which are in close association with humans are of public health importance because they can mechanically transmit pathogenic organisms, and are a source of powerful allergens.

The German cockroach is worldwide in distribution. It is the most prevalent species in and around homes, apartments, supermarkets, food processing plants and restaurants. Many homes and business establishments become infested with German cockroaches when they are introduced in infested cartons, foodstuffs and other materials. The German cockroach is about 5/8 inch/16 mm in length, brown in color, with two dark longitudinal streaks on the pronotum. The male is light brown and somewhat boat-shaped. The female is slightly darker in color with a broader and rounded posterior. German cockroaches breed throughout the year indoors, yet favors a humid environment and an average temperature of about 70 degrees F/21 degrees C. The German cockroach produces more eggs per capsule then other pest cockroach species. In addition their young also complete their growth in a shorter period of time. Female German cockroaches carry their egg capsules until they are ready to hatch. The number of eggs in an egg capsule is generally 30 - 40.

The American cockroach is the largest of the house-infesting cockroaches being 1 ½ inches long with fully developed reddish brown wings and light markings on the thorax. The American cockroach is commonly found in sewers and basements, particularly around pipes. The American cockroach is found most commonly in restaurants, grocery stores, bakeries, and where food is prepared and stored. In warm months, especially in the summer, alley ways and yards may become heavily infested. American cockroaches can take flight and have been recorded capable of long flights. The female will not drop her egg capsule as soon as it is formed and will carry it for a few hours or days before depositing it. Egg capsules are often glued to surfaces when deposited. The American cockroach female does not drop her egg capsule indiscriminately, but will usually hide them with great care in crevices, or bury them in softwood or workable material. The number of egg capsules produced by the female is from around six to fourteen, with about 16 eggs in each capsule placed in two parallel rows. Newly emerged nymphs will molt 13 times before reaching maturity.