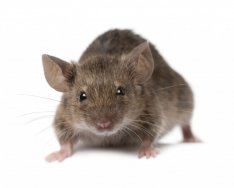 Rats and mice, in general, are found around all areas where humans dwell. Both rats and mice eat any kind of food people eat. They also contaminate 10 times as much food as they eat with urine, hair and droppings. They can carry many types of diseases including bubonic plaque, spirochetal jaundice, leptospirosis, rabies, ratbite fever, bacterial food poisoning just to name a few. Rats and mice also can cause fires by gnawing electrical wires in attics and other areas. The most common rodents around living areas are the Norway rat and house mouse.

Norway rats (Rattus norvegicus) are fairly husky, brownish rodents that weigh about 11 ounces to one pound. They are about 13 to 18 inches long including the tail which is 6 to 8 inches long on average. Norway rats prefer to eat fresh meat, fish and grain but can also survive easily on a small amount of garbage or decayed food along with an ounce of water. Their harborage areas are usually in a range of 100 - 150 feet but may exceed that area if food is scarce. Norway rats are burrowers and often dig in garbage, along foundation walls, under buildings and concrete slabs. Norway rat droppings are ¾ inch long and capsule shaped. Norway rats live for about 1 year on average and reach sexual maturity in around 3 to 5 months. Their litter varies from around 6 to 12 on average and they can have around 7 litters per year.

The adult house mouse (Mus musculus) is about 3 ½ inches long. The ears are moderately large and distinct. Mice are dusty gray, but some may be light brown to dark gray with the belly slightly lighter or a very light cream color. Their tail is about as long as their body and head combined (roughly 2 ½ to 3 ¾ inches). An adult mouse weighs ½ to 1 ounce. The house mouse can live outdoors as a field rodent. However they should not be confused with pine mice, meadow mice, white-footed or dear mice, moles or shrews, all of which are entirely different animals. The house mouse is a prolific breeder. At 35 days of age they mature and carry embryos for 18 to 21 days. If a female aborts she can become pregnant again within 48 hours. The average litter size for the house mouse is about six. On average the house mouse can have litters every 40 to 50 days. On average mice live for 15 to 18 months, and some have been noted to live as long as six years. The house mouse eats about the same kinds of foods humans do including meats, grains cereals, seeds, fruits and vegetables. They prefer sweet liquids to water for drinking. The house mouse feeds on average 15 to 20 times a day. Their harborage areas are usually in a range of 15 to 20 feet. Once mice find a food to their liking they may avoid all other items.

Below are a few interesting physical and biological abilities mice possess:

Mice are excellent climbers and can run up almost any roughened wall without breaking stride. Mice, although preferring not to swim, can do so if needed. Mice can jump a vertical distance of 12 inches from the floor to an elevated flat surface. Mice are capable of jumping from a height of 8 feet to a floor without injury. Mice are capable of squeezing through an opening slightly larger than ¼ inch. In six months, one pair of mice can eat about 4 pounds of food and produce some 18,000 fecal droppings. Mice are not blind, but have poor vision and cannot clearly see beyond 6 inches. Mice depend on outlines, not details.