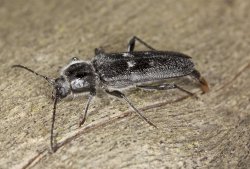 Wood boring beetles are second to termites in importance regarding wood destroying insects found in the home.

In general, adult Lyctid beetles are 1/8 to ¼ inch long. They are slender beetles and range in color from reddish-brown to black. Lyctid beetles infest only hardwoods, such as oak. Lyctid beetles can live in wood with a wide moisture range, from a dry 8 percent to a very moist 32 percent. Only the larvae stage of this beetle damages the wood. The female lays an average of twenty to fifty eggs in crevices or on the ends of boards. When they hatch, the tiny larvae bore down into the wood. As the larvae grow, they bore to a point just underneath the surface of the wood, there they change into adults. After they change into adults, the adults cut a 1/32 to 1/16 inch circular exit hole in the surface of the wood. Usually a powdery wood dust is created by the beetle’s feeding which is pushed out as the adult beetle emerges. Male and female beetles exit at the same time and mate, and a new generation of females will lay eggs again. The entire life cycle for most Lyctid beetles takes 10 to 12 months.

There are more then 200 kinds of Anobiid beetles, of which very few infest wood. Most Anobiid beetles found in homes, like drugstore beetles, infest grain products. The few that do infest wood are also called Powderpost beetles or deathwatch beetles. The wood infesting anobiids range from 1/8 to ¼ inch in length. Their color ranges from reddish brown to nearly black. The body segment just behind the dead is hook like and completely covers the head when the insect is viewed from above. Anobiids can infest both hardwoods and softwoods. Only the larvae feed on the wood. They generally prefer wood in cool locations with moisture levels above 14 percent. Anobiids are the most common beetles infesting crawl spaces. Female anobiid beetles usually lay fewer then 50 eggs under wood splinters, in cracks, or in old exit holes. Like the Lyctid beetle, the small anobiid larvae bore into the wood, where they eat and develop. When the larvae change into adults, they chew round exit holes between 1/16 and 1/8 inch in diameter. The male and female emerge together and mate, and the female deposits her eggs. Though the females fly well and can lay eggs at new locations, they are most likely to lay their eggs on the board from which they emerged. Most anobiid beetles take 2 to 3 years to complete their life cycle.

The old house borer belongs to a group called cerambycid beetles, which are also known as long-horned beetles. Most long-horned beetles are wood borers in the larval stage, but only the old house borer is a serious pest in homes. Adult old house borers range from 5/8 to 1 inch in length. They are brownish black in color, with many gray hairs on the head and forepart of the body. The segment just behind the head has a shiny raised bump on each side, giving it the appearance of a face. Old house borers infest softwoods, especially pine. These beetles can be found in old houses, as their name implies, but they are actually more common in newer homes. The females lay about 50 eggs in cracks and crevices in wood. The larvae penetrate the wood to feed, but they often stay near the surface of the wood. Larvae usually require 2 to 3 years to develop in wood with 15 to 25 percent moisture, but they can take as long as 15 years to develop in very dry wood. Usually, larvae become adults in the spring, but they may not emerge immediately. When they do exit, the adults cut oval holes about ¼ to 3/8 inch in diameter. Adults are normally most active in June and July.